Nothing is more frustrating in disc golf than standing ten feet from the basket and absolutely whiffing a putt. When I first started playing disc golf, I constantly found myself in this maddening situation. Usually, it resulted in a jump, yell, and an angry spike of the disc into the basket only to have it pop out again and cost me another stroke. Sure, practice will help improve your game, but developing the right disc golf mentality is one of the most important things you can do right now to become a better disc golfer.

What is the Right Disc Golf Mentality?

For the purpose of this blog post, I define “right mentality” as having a consistent state of mind while playing a round of disc golf regardless of what happens. This means that if you are usually a loose cannon swearing after a bad shot you don’t suddenly become focused and quiet just because you aren’t playing well. This also means if you’re usually very focused, you don’t freak out when you make a bad shot. 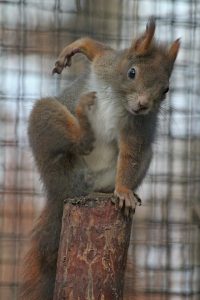 Squirrels can be distracting!

Of course, these things are easier said than done since we’re all emotional beings that get easily distracted (I picked up my phone two times while writing the last two paragraphs and started thinking about picking it up again while writing this sentence. NO! DON’T DO IT!). It’s one thing to say “have a consistent mentality”, it’s another thing to put it into practice. So, let’s explore a few methods you can use to improve your mentality in disc golf!

I’d like to offer a quick disclaimer before I jump in. I’m not a sports’ psychologist, or a professional disc golfer. The techniques below are based on my own experiences and they may not work for everyone. With that in mind, let’s get into it!

Develop a Consistent Routine and Stick to It

Changing how you approach putting, or driving, will wreak havoc on your mental game. When you change your approach to a shot, and subsequently the shot itself, it becomes harder to develop muscle memory. Without muscle memory you won’t improve. Instead, you’ll consistently miss your line on throws and become a frustrated jumble of emotions. The more consistent your routine becomes, the more confident you’ll become. If you’re confident about your shots, then your mental game will naturally improve.

How I Developed My Routine

When I practice putting I usually use between 5 and 10 putters. As a result, I’ve developed a quick putting routine since I just pick up the next disc and throw it without having to retrieve it after every putt.

At first, when I starting practicing this way it didn’t seem to translate to better performance on the course. This led to a lot of frustration: why wasn’t practice making perfect? I realized it was because on the course I didn’t rush my putts and instead had a much slower routine.

I’ve since adjusted my round-play putting routine to match my practice putting routine. I do take some extra time to focus in on the putt, but before I throw it, I step off my lie, reset, and then step back on and throw quickly like I do in practice. Since I started doing this, my putting has improved from being roughly 40% accurate from 10-20 feet, to 70% accurate from 10-20 feet (Like I said, I’m not a pro, still got a lot of practicing to do).

Don’t believe me when I say developing a consistent routine is important? Take a listen to 5x world champion (and my favorite disc golf player) Paige Pierce talk about consistency in your putting routine:

Focus on What You Can Currently Control at all Times

This mentality technique comes from my days of playing ultimate frisbee. In ultimate, a tournament usually lasts two days and consists of ~8 grueling games. If you don’t know how to keep yourself focused and at a consistent emotional level throughout all those game your play suffers. In order to improve my mentality in ultimate, I adopted this “focus on controllables” method.

Focusing on the controllables is exactly what it sounds like, except many people don’t fully take in its meaning right away (myself included). To offer an example, if I make a bad throw in ultimate and the other team ends up scoring because of it, I can feel sorry for myself and get angry, or I can go to the sideline, throw the same throw a few times in a row to dial in, and then go out and focus on winning the next point.

Similarly in disc golf, if you make a bad shot you can no longer control it. Instead you must focus on your next shot because that is the only thing you can control.

What Can You Control in Disc Golf?

Below is a diagram that I borrowed from actual sports’ psychologists that identifies the things you can and can’t control in disc golf. Everything inside the circle signifies something you can and should focus on in disc golf, while everything outside the circle is uncontrollable and thus shouldn’t consume your energy or focus.

You’ve probably heard of this one before, but I’ll put it into disc golf context. You just threw an approach shot and it landed at an uncomfortable distance. You aren’t too confident in your putting consistency from the distance and you get a little nervous. Instead of walking up to the disc and worrying about whether you can make the putt or not, take three deep breaths and in your head tell yourself “I’m making this putt.”

Similarly, you can do mental visualization the night before you play an important round:

Pick a quiet moment (just before you fall asleep, for example) and play the game as if it were a movie in your head, starting with the first tee-off and rolling the “tape” of how you’d like the round to go until you drift off.

Before I played ultimate, I used to be a kicker in football. If I approached a field goal worrying about whether I would make it or not, 90% of the time I wouldn’t. If I instead took a few deep breaths before stepping on the field and then in my mind locked in on making it, I was much more successful. I believe putting in disc golf is very similar mentally to kicking in football.

Use Perspective to Keep Your Emotions in Check

I love this technique because we’re not perfect, and our emotions do flare up during rounds when we make mistakes. When mistakes happen, I find that the best way to cool myself off and get back on track is by using perspective. At the end of the day, very few of us are professionals that rely on disc golf to survive. We have WAY MORE room for error than a touring professional does. So, if you’re having a rough round, take a moment to listen to the birds, look up at the trees, and acknowledge that in this crazy world that we live in, you’re getting worked up about incorrectly throwing plastic in the woods.

Let me know what I missed and what you’ve done to improve your mental game in the comment section below!